Life is just Better with a Bike

Cycling has become a huge part of my life over the past year, but my passion for being on a bike goes back a lot further, to when I was a child playing with my brothers, friends and neighbours.

I have very fond memories of many fun times I had as a child on my bright yellow TomCat trike. From riding it up and down the driveway when I first got it, to cycling around the playground and playing field at junior school, to cycling with friends in the neighbourhood as a teenager, it gave me a new and fun way to get about and keep moving. One of the highlights was playing rounders on my trike. I would hit the ball (hopefully), drop the tennis racket in my basket and off I would cycle around the rounders pitch. Wobbly as I was, I was still very keen to keep active, and my trike also gave me a way to do what everybody else was doing and join in the way worked for me, which happened to be on three wheels! However, as teenagers do, I eventually grew too big for my trike and it went away into the garage.

Fast forward to three years ago, when I hadn’t been cycling in more than 10 years (apart from the odd cycle on an adventure week away) and hadn’t really thought about it either. I came across Gloucestershire Wheels for All in July 2017, an inclusive cycling group that had a wide range of adapted bikes I could go on and ran sessions three times a week at Blackbridge Athletics Track in Gloucester (see their You’re Welcome profile here). The child in me came out again! I had forgotten how good it felt to be on set of wheels that gave me a huge sense of freedom and achievement from some hard pedalling! I went as often as I could, and there were two bikes I enjoyed in particular – the recumbent trike and the hand cycle.

A recumbent trike is a three-wheeled bike where you are sat in a seat with your legs out in front of you to pedal. The recumbent I cycled had a wheel either side of where I sat and one wheel in front. The handbike I used had a similar seat which I sat upright on with my feet strapped in on platforms with handlebars in front of me that I moved in the same circular motion as foot pedals but moving both hands together. There are lots of different types of recumbent trikes and hand cycles.

The hand cycle was always my favourite, as it got me working my

whole upper body in a way I never have before and it felt great! 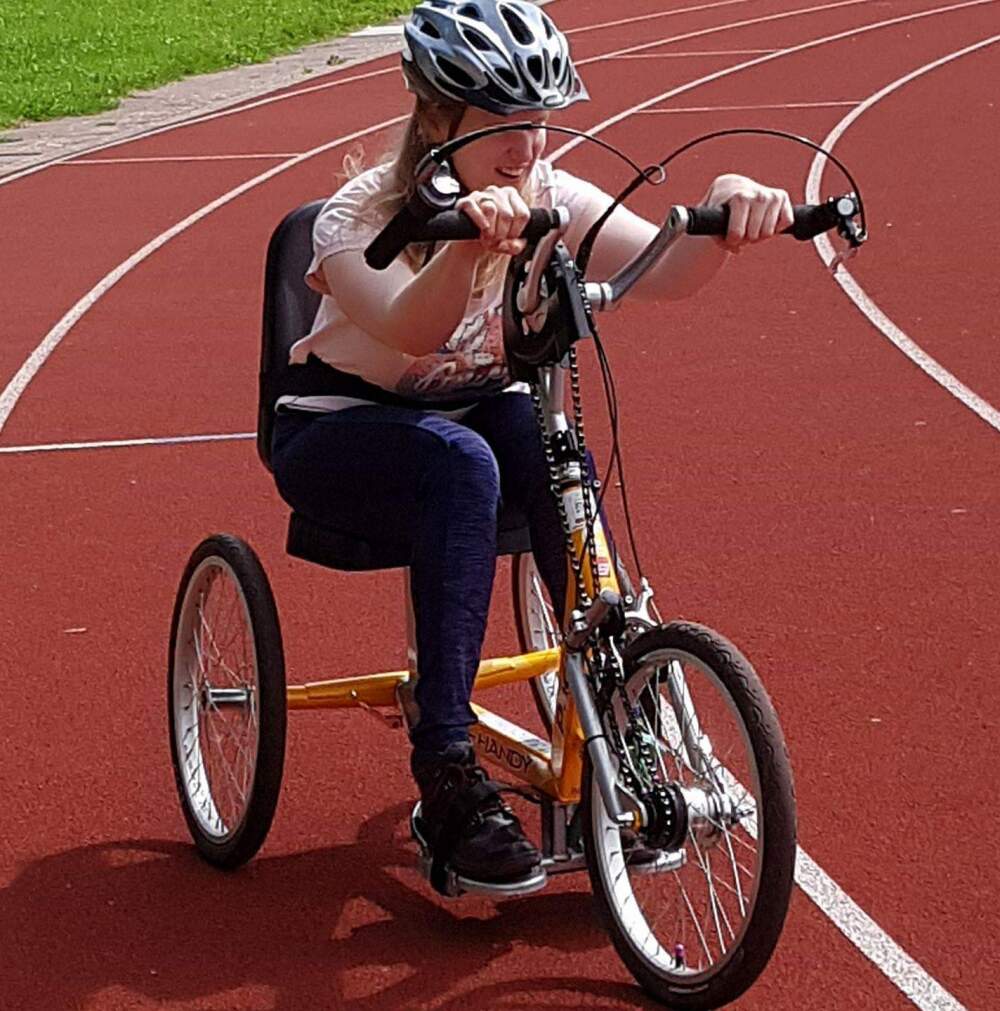 I really saw the improvement in my fitness and stability just three months later when, on holiday in Cornwall, I walked a good 1.5 miles along the beach holding onto someone but with better balance than I’d had in a long time. I had not been able to walk that kind of distance before, and I knew this massive improvement was down to cycling all summer.

I loved going cycling and also went out to cycle with Gloucestershire Wheels for All at Pedalabikewaway in the Forest of Dean, where on one memorable occasion last year I took a side-by-side trike out with my brother onto the Family Cycle Trail (of around 11 miles) and instead of doing a short stretch and then coming back we ended up cycling around the whole trail!

After cycling with Gloucestershire Wheels for All for some time I decided I wanted to get my own bike – I loved the outdoors and the exercise and I wanted to be able to do that whenever and however much I wanted to. Of course, with the enjoyment I felt being on a hand cycle, it was a hand cycle I had to get, and in May 2019 I finally got it. I felt like a child who had just been given a bike for Christmas! I was out on it nearly every day and I often didn’t want to come home! Warm summer evenings became my favourite time to cycle, and I quickly saw my strength and fitness increase as I was able to do more, go further and get up some slopes that were initially impossible.

Being out on my bike around Cheltenham became my favourite thing to do. It was the first time I had been able to exercise on my own, without even needing someone to take me somewhere, and the sense of freedom and independence from being able to go out whenever I  wanted to was huge.

I realised how important it was for me to exercise, because I felt so good during and afterwards! I loved the feeling of working my upper body really hard and focusing my energy into something really fun and exhilarating. After a cycle I felt great because my body felt so healthy and strong from the workout.

Just six weeks after getting my bike I took part in a 25 km overnight cycle in Bristol, the Bristol Nightrider 2019. The standard distances for the Nightrider are 50 km or 100 km, but I cycled with a team from Gloucestershire Wheels for All, and the Nightrider team made it more accessible and inclusive by allowing us to enter to do 25 km.

What an experience! Setting off at 11:15pm on Saturday night, we cycled through the night, including cycling under the Clifton Suspension Bridge and riding along the harbour in the early hours. We brought a couple of side-by-side tandem bikes with us that two people can ride, so if I got tired I could swap onto one of them and someone else would ride my hand cycle to give me a break. I set off determined to do as much of it as I could on my handbike, having worked hard to build up my stamina and strength beforehand, but I expected to swap onto the tandem at some point. At 4:30am on Sunday, though, I passed the finish line having hand cycled the whole 25 km! I needed an extra push up some of the steeper parts of the route, but I kept cycling the whole way and it was a massive achievement!

In preparation for the Nightride I also started Personal Training at the gym and have continued training since. I’ve seen really big improvements in my strength and core stability over the past year from these sessions, an addition to my weekly routine that I really enjoy and wouldn’t have considered before having my bike.

I’ve had my handbike for a year now and I still love being out on it! It has changed my life. I can go cycling whenever I want to, whether I need to get out and do something really active or I just want to have a relaxed evening ride in the summer. I always come back feeling good, both physically from a good workout and mentally from the outdoors, the exercise and the freedom of cycling! I feel happier and more motivated after a good cycle. I love the feeling of flying along on my bike, working hard uphill and enjoying the downhill afterwards, and just losing track of time when I’m out riding.

As I continue to get stronger it’s great to be able to do more and more on my bike that previously seemed impossible. Getting up a slope I couldn’t do before gives me a massive sense of achievement! It has also been great to explore new parts of Cheltenham I’d not been familiar with before, and I’ve even taken it along the Gloucester Canal

and out to the Forest of Dean. 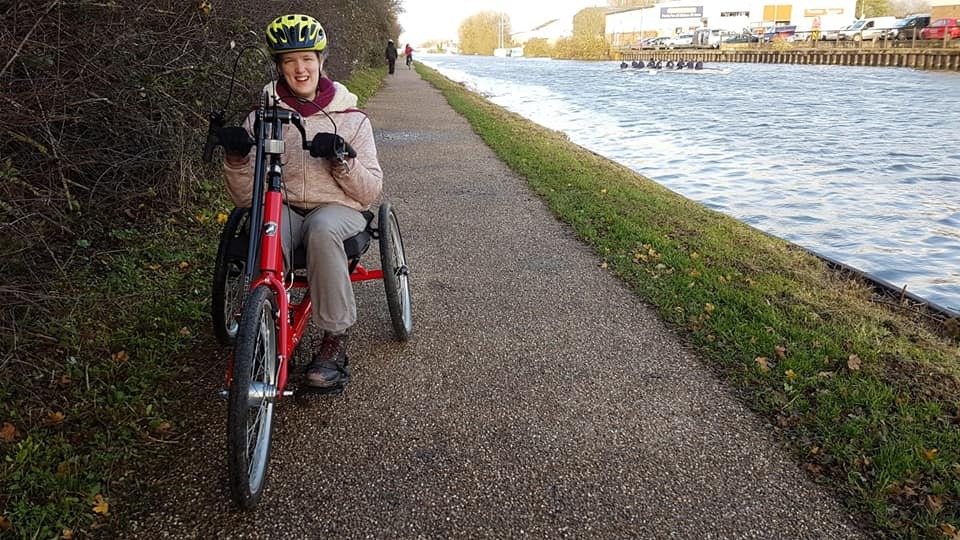 I haven’t been able to go out on my handbike for the last two months because of pain in my hand, but I am now borrowing a recumbent trike from Gloucestershire Wheels for All while they are unable to run sessions at Blackbridge due to COVID 19. The time I had without being able to cycle has reminded me how big a part of my life it has become and how much I miss it when it’s not there. I’ve only had the recumbent a week and have been out on it nearly every day. In that short space of time I have felt so much better and have had so much fun being out again. I’ve cycled around Pittville Park in Cheltenham and along the Honeybourne Line between Leisure At and Cheltenham Spa train station, and I’m looking forward to exploring more places. Having a recumbent trike is a great addition to my handbike as I can go further, faster and take on greater challenges as I have much more

power in my legs than in my arms. 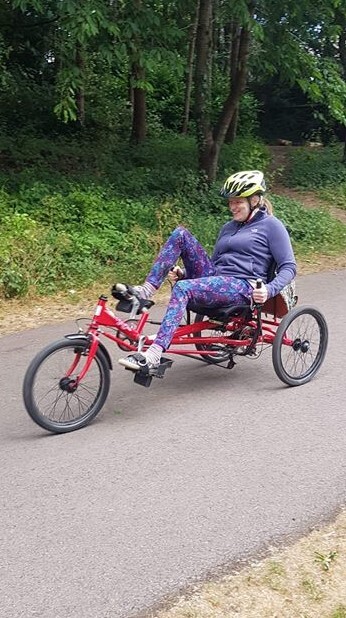 I can’t imagine life without cycling in it now. For me, life is just better with a bike!

For more stories, news and ideas read our blog.